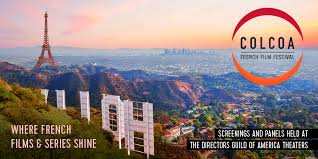 COLCOA (City of Lights, City of Angeles) the French Film festival is happening at the newly renovated Directors Guild, September 23-28, 2019.  The film program was announced on August 27, at the home of the French Consul in Beverly Hills.
"Les Miserables" directed by Ladj Ly, and which also won the Jury Prize at the 2019 Cannes Festival will headline the festival on opening night.
There is also a student film, "Au Bout des Doights (In Your Hands)".  It will be shown on Saturday, September 28 and will include a Q&A with the director after the film.
To attend any of the screenings, find out about the list of films available, and to buy tickets, click here
Posted by JWJones at 8/28/2019 09:42:00 AM